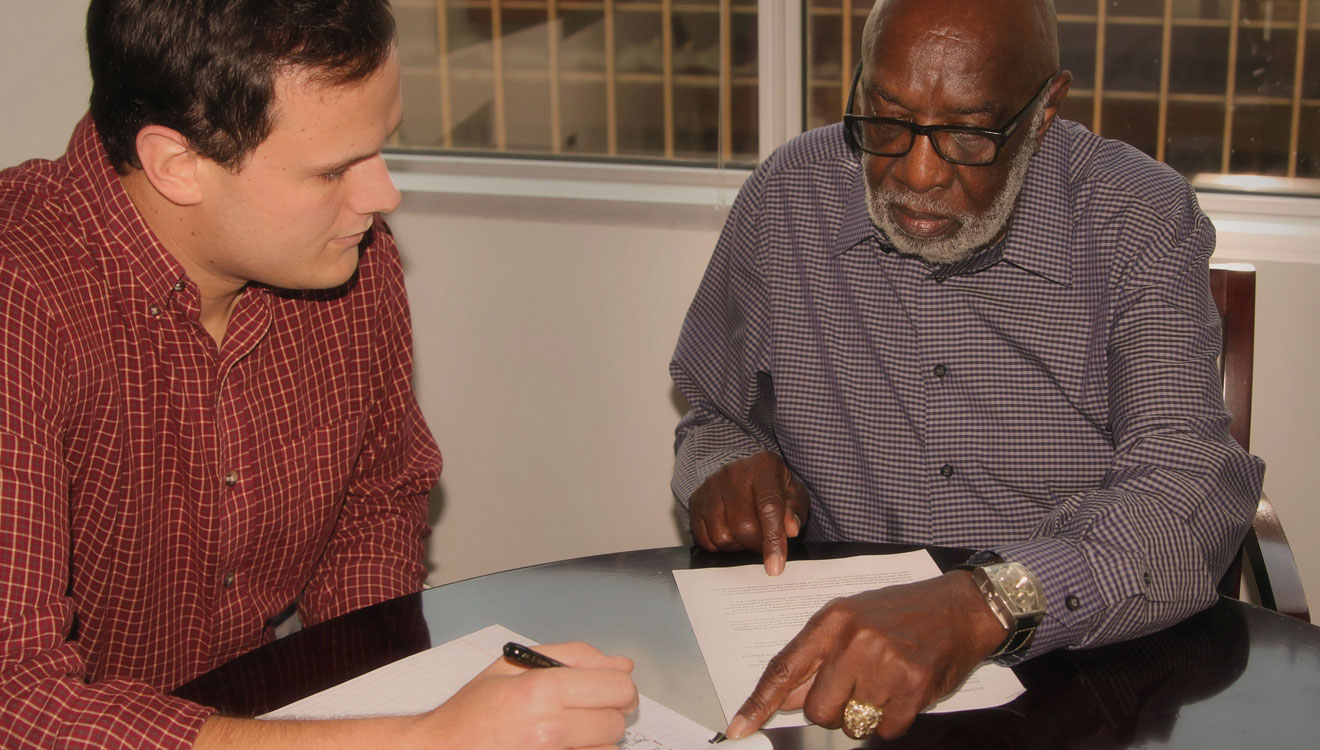 As a recent addition to the o2 team and a young man still in the early years of his career, I’m reminded each day that I have a lot to learn. It’s a fast-paced industry, and it’s both daunting and thrilling to realize that there’s no telling what might happen in a day at the agency; all I can do is my best impression of a sponge.

Recently, though, I decided that to be proactive in understanding the bigger picture, I should start by looking internally. I know the company and its people (having an office-wide Cheez-It-taste-test-voting-extravaganza was a solid ice-breaker), but I wanted to learn our history and the events from the past that define and inform who we are today.

During my own research I read briefly about an encounter between our founder, Shelley Stewart, and a tie salesman in 1958. It was clearly important, but I could tell there was a much bigger story to be shared. I needed to hear it. I also got the idea that it might be able to teach me something.

All it took was an email to Shelley. Soon after, I was in his office. He greeted me with a hug and a “Hello, young man,” and with that, the story began.

I came away with a much deeper understanding of o2’s history and the values that keep our family tree rooted and growing – I also knew that I wasn’t the only one who could learn something from it.

Before he founded the agency that is now known as o2ideas, Shelley was first and foremost a radio personality on WENN. Many folks, especially those who were brought up in Birmingham during the ‘50s and ‘60s, knew him as “Shelley the Playboy,” a vibrant, quick-witted radio host who captivated his listeners with a fusion of comedy, social commentary and an array of catch phrases that would decorate his transitions from one song to the next.

Though he might not have realized it at the time, he was already learning firsthand some of the most crucial skills in marketing: connecting with your audience, building a trustworthy and respected brand. He was a natural, too. By 1958, he recalls, “I was very popular; I had become very well-known throughout the United States. Anywhere I went, I carried a huge listening audience. I visited those cities [New York, Chicago, Los Angeles, Miami] and I was in the market.”

So, in 1958 when station manager John McClendon was opening a new station in Shreveport, Louisiana, Shelley agreed to spend 30 days in Shreveport opening the station, after which he would return to Birmingham. When picture day at the station came and he didn’t have a tie, he went into downtown Shreveport to buy one.

Of course, customer service was hard to come by for a black man in a fine clothing store in Louisiana in 1958. But as Shelley was getting ready to leave the last store that day empty-handed and ignored by all salespeople thus far, a salesman came out of the back room.

“He says, ‘Sir, can I help you?’ And he came up and began to talk, and he was so nice to me. I loved his personality. I said to him, ‘You know, you would make a great radio advertising salesman.’” The salesman was unsure; he had just gotten out of the military and moved to Shreveport from New York. He married a woman in Shreveport, and he didn’t know a thing about radio. Shelley told him, “Well, listen, just come and apply for it. We can teach you about that.” Shelley bought a tie, the salesman introduced himself as Cy Steiner, and with a handshake they parted ways.

Steiner showed up at the radio station the next morning and, sure enough, got the job. He found immediate success selling advertising spots on the radio. Shelley, knowing he would return to Birmingham after his 30-day contract ended, convinced Steiner to move to Birmingham, where he would work at WENN for three years, then Channel 6 for another six years. A natural salesman, Steiner spent the better part of a decade learning the market.

Their relationship remained a strong one throughout that time. As Steiner settled into the city and built his network from a sales perspective, Shelley continued to build on his well-established relationships with the business owners in Birmingham. “They became friends of mine. My being a radio personality – they called it a ‘DJ’ at the time, but I went beyond that – I was talking to them about building business with the total community. At that time, I guess you could say they didn’t know how to communicate more than one side. But I talked about the big picture: So why can’t we do it together?”

So, in 1967, the two would share another handshake – this one over a glass of wine and an equal-partnership agreement in their new advertising agency, Steiner Advertising. The partnership would favor each of their strengths; Shelley had long been a communications powerhouse for some of the area’s largest businesses (Bruno’s Supermarket, Parisian), and Steiner had an upper hand on most salespeople.

Of course, the name did not reflect Shelley’s vital role in the agency, but such was by design. He decided to be a silent partner, to keep his involvement out of the public eye. This was nothing new to Shelley; since 1949 he had advertised for countless local businesses on the radio, but could never be a salesman because of his skin color.

It’s a hilariously ironic use of “silent” when you consider how much business he facilitated with his booming voice and knack for building relationships.

Nevertheless, he reminds me, “Birmingham wasn’t ready for it.”

The city was certainly ready for Steiner Advertising, though.

“So we did it together,” Shelley tells me. “It takes the black and white keys to play the Star-Spangled Banner, so we did it that way. It was about building relationships through service. It was about people; it was about inclusion. We just believed in that from the beginning.”

Shelley went public with his ownership of the company around the same time we became o2ideas. By then, Birmingham was more than ready to accept that the owner of one of the most successful agencies in the region was black. It was time for a name that reflected the agency on a deeper level: “We knew that people had different ideas, and we just believed in dealing with all people. So, we take an idea and we add oxygen to it; let it breathe. We put legs on it to make it walk. That’s who we are.”

So, there is the (very) abridged version of the o2 origin story. For a new guy looking to learn about life’s bigger pictures through the lens of a nearly 52-year-old agency, it’s safe to say I got what I asked for.

As for the bigger picture, my efforts to sponge new information rewarded me with a tsunami of perspective.

I was urged to consider my own life; Birmingham is a new city for me, and in the couple of months I’ve lived here I’ve walked into many clothing stores looking to bolster my business-casual wardrobe. There is certainly a case to be made here in favor of brick-and-mortar stores over online shopping.

If anything, the story reminds me of the power of being kind, of having the courage to show kindness to someone your peers may have already written off. A few months ago I lived in a different state, oblivious to the fact that now I’d have a desk at o2ideas, invited each day into the office’s vortex of free-thinking and collaboration.

To think that I wouldn’t be here if Cy Steiner hadn’t simply given Shelley a minute of his time and some eye contact. It’s a scary thought, but it sure does explain the dynamics of my new team in a profound way. If I didn’t already feel like part of the family, Shelley’s story solidified that this place feels like home because that’s how the company was built.

There are a lot of elements of my and Shelley’s conversation that I’ll have to share, but my main takeaway here is that relationships beget relationships. Large-scale, long-term business relationships will develop far more naturally if you already approach day-to-day, seemingly mundane encounters with inclusivity and empathy in mind.

Stay tuned for more lessons I learned from Shelley, and in the meantime, learn more about o2 here.